A circus life can be cruel to animals.  Case in point, Aasha, 9-month old Bengal tiger.  Aasha belonged to a traveling circus when she was discovered and subsequently rescued by Vicky Keahey, founder of In-Sync Exotics Wildlife Rescue and Educational Center.

The tiger cub was in such bad shape that she only weighed 1/4th of her normal weight, had ringworm, and open wounds. According to Vicky, “Aasha’s bald spots covered almost her entire body and her skin was dry [with] cracked, darken areas and bleeding.”

“Every day, twice a day, I would go in and give Aasha medications and spend time with her.”  In addition, she would also administer medication baths, something Aasha didn’t like very much.

After 8 weeks, Aasha began healing and even grew fond of swimming.  And 8 months later “she looked like a real tiger.”  Vicky gradually introduced her to another tiger named Smuggler, the two quickly formed a friendship and, now, even sleep in the same enclosure.

Stunted by Malnutrition, tiger cub only weighed 30lbs, 1/4th of her normal weight

She had visible open wounds, cracked skin and bald spots all over her.

“Every day, twice a day, I would go in and give Aasha medications and spend time with her.”

Eight weeks after her rescue, she gained some weight, her wounds started healing and began to grow new fur.

She met Smuggler, they quickly bonded.

They even share and sleep in the same enclosure.

Initially, Aasha, didn’t like baths, now she loves them.

Here is Aasha enjoying some “me time”. <3 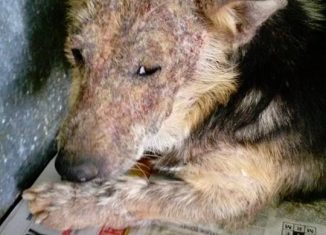